I have always believed that a clean energy revolution can only be achieved with support and buy-in from the big oil and gas companies. It seems that many such companies are now starting to agree.

A few years ago, 10 major oil and gas companies, between them responsible for over 20% of world oil and gas production, came together to form the Oil and Gas Climate Initiative (OGCI), an “initiative which aims to show sector leadership in the response to climate change“. The ten companies are BP, Total, Statoil, CNPC, eni, Pemex, Reliance Industries, Saudi Aramco and Shell.

The initiative’s mission is to work together to achieve notable reductions in greenhouse gas emissions from the oil and gas industry, while still meeting world energy demand. At present, the OGCI is focussing its efforts on three working groups – Low Emissions Roadmap, Carbon Capture, Utilisation and Storage, and Managing Methane Emissions.

It has also prepared an interesting matrix which maps actions identified by the IEA as having the potential to reduce greenhouse gas emissions sufficiently by 2040 to remain on track for a 2°C scenario against the oil and gas industry’s ability to influence such actions. This matrix is reproduced below (source: OGCI): 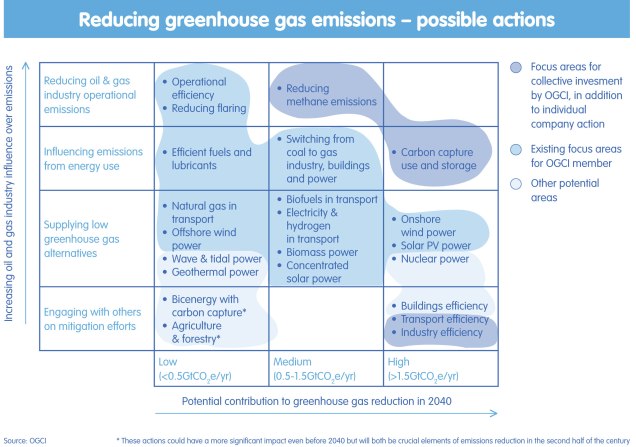 In November 2016, the companies behind the OGCI finally put their money where their mouth is and set up OGCI Climate Investments, a partnership with a committed US$1 billion of funding to be invested over the next decade in innovative technologies and start-ups which propose solutions to substantially reducing greenhouse gas emissions. The partnership will operate out of Imperial College London’s White City Campus, bringing it into direct contact with the Better Futures initiative recently launched by the Mayor of London (see my blog on this). OGCI Climate Investments appointed its first CEO, Dr. Pratima Rangarajan, in May 2017 which hopefully means that it will now come into full operational mode.

I hope that both the initiative and the investment partnership will actively push ahead with their stated aims and that we will begin to see the fruits of their labour in the not too distant future. I also hope that other oil and gas companies will join their cause. 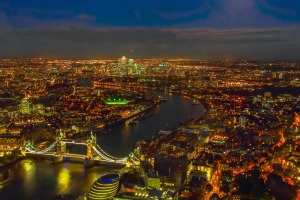 The incubator, known as “Better Futures“, aims to provide funding and other technical and business support to over 100 technology start-ups in London which focus on clean technology innovation, low-carbon solutions and combatting the problem of climate change. It is hoped that the incubator will spur on the creation of a clean technology hub in London.

Indeed, as part of the incubator package, some qualifying start-ups will be given the opportunity to pursue their research at Imperial College’s Centre for Cleantech Innovation.

In addition to launching the Better Futures incubator, the London Mayor also announced his desire to transform London in the world’s leading smart city. According to a recent report by IESE Centre for Globalisation and Strategy, London is already Europe’s leading smart city, and is second only to New York in the global rankings. The Mayor was quoted as saying: “The potential for cutting-edge technology to tackle a host of social, economic and environmental challenges is immeasurable.  From air pollution and climate change to housing and transport, new technologies and data science will be at the heart of the long-term solutions to urban challenges.”

Initiatives such as the incubator and the drive to make London the world’s leading smart city are crucial at this time as London begins to find a role for itself in a new, post-Brexit role. More of the same, please, Mr Khan!